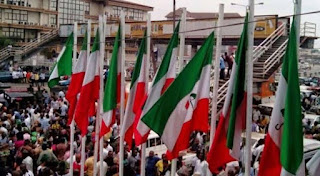 There was drama in the Ebonyi State High Court on Wednesday as the Publicity Secretary of the state Peoples Democratic Party, Chika Nwoba, collapsed outside the court premises as the police were about arraigning him.

He was brought into the court premises by officers and men of the Ebonyi State Police Command at about 2:45 pm but the period of the Court sitting was shifted due to Nwoba’s health condition.

Following the development, he was rushed out of the court premises by the Police and later brought back to the court, in order to allow the court session to commence the second time.

When our correspondent arrived at the court premises the second time, the PDP Publicity Secretary was looking pale, tired, dizzy, and weak inside a police patrol van, waiting to be arraigned.