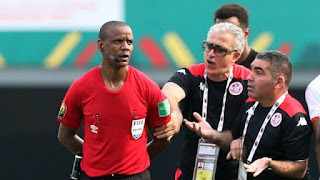 Janny Sikazwe, the referee at the centre of the controversy at the end of the 2021 Africa Cup of Nations match between Tunisia and Mali on Wednesday, was suffering from heat stroke and severe dehydration.
It has been revealed that Sikazwe was taken to hospital after the game.
Tunisia have appealed for their Group F opening fixture to be replayed, after Sikazwe blew the final whistle after just 85 minutes and then again 17 seconds before 90 minutes were up.
Mali eventually won the encounter 1-0.
AFCON’s head of referees, Essam Abdel-Fatah, has now come out to defend the performance of Sikazwe, claiming he was suffering from the effects of the 34-degree heat level and 65 percent humidity in Limbe, Cameroon.
Be a part of Grassroot Reporters Team. Report latest happenings around you. Send in your reports, adverts to WhatsApp: +2347033996028 or email: mondayobiojnr@gmail.com