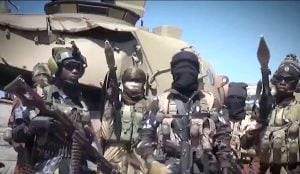 He was taken alongside two brothers; all belong to the royal family of Askira/Uba Emirate.

The trio was kidnapped on Saturday while travelling to Maiduguri, the state capital, after attending a function in the town.

Askira/Uba, a Local Government Area in Borno, has Askira as the main community.

A source told PRNigeria that 50-year-old Mohammed and his siblings are brothers to the Emir of Askira, Abdullahi Mohammed Askirama II.

Since the death of JAS leader, Abubakar Shekau, ISWAP has been consolidating its grip in locations around Lake Chad.

ISIS recently inaugurated 45-year-old Sani Shuwaram as the new Leader (Wali) of ISWAP in the region.

The sect’s membership has swollen with the defection of hundreds of Boko Haram fighters under Shekau.

Some Borno towns have been marked for attacks, putting doubts on the efforts of the state government to resettle Internally Displaced Persons(IDPs).