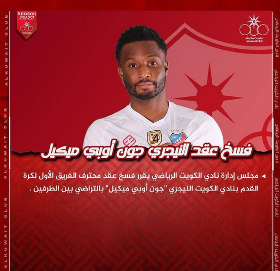 The club announced Mikel’s departure via the social media on Thursday night.

“Termination of the contract of the Nigerian John Mikel Obi,”reads a statement on the club’s Intagram page.

The 34-year-old linked up with the Brigadiers in July after severing ties with Sky Bet Championship club Stoke City.

He left Al Kuwait SC just four months after joining and without making a league appearance for the club.

The midfielder however featured for the club in the AFC Cup.