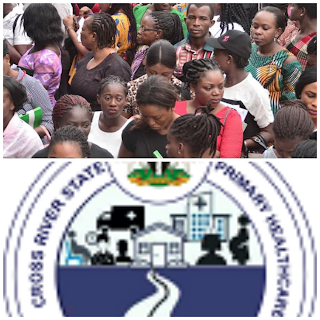 Primary Health Care which was conceptualised by the Alma Ata Declaration of 1978 is a grassroots approach towards universal and equitable health care for all. It was modelled to address the health problems in rural communities in order to achieve universal health care by providing accessible, preventive, curative and rehabilitative services. It is the first level of contact of individuals, families and communities with the national health system.
This cannot be achieved without a well-trained primary health care workers to man the health centres.In order to address the problem of inadequate staff in these centres, the Cross River State government, through the state’s Primary Healthcare Development Agency, in 2018 announced plans to recruit 1,000 primary health care workers to tackle the dearth in manpower in these centres.The agency which was then headed by Dr Betta Edu, who is now the Commissioner of Health in the state opened its portal for candidates to submit their applications. The process which began in December 2018 climaxed with the shortlisting and written interview for candidates in March, 2019.Dr Edu had assured that successful candidates would get their appointment letters within one month after the test.But 3 years after, the candidates are worried over the non-release of names of successful candidates and subsequent issuance of appointment letters.Kelvin (not real name) had told GRASSROOT REPORTERS that he felt scammed by the agency. He said he spent so much to register for the job and attend the interview.
“I spent hours on the road to attend the written interview. It is 16 months now since that interview was conducted and nothing yet. My hope is on getting that job because since I finished school, no job”.Kelvin is not the only one who seems to have lost faith in the process. Ekanem (not real name), an indigene of Odukpani LGA also told GRASSROOT REPORTERS the authorities were not being sincere with the applicants.
“We have made effort to hear from Cross River State Primary Health Care authorities but they keep asking us to be patient. How can someone write an exams for a year and 3 months now, no result, no appointment letter. I’m appealing to the present DG of the agency to please, release the list of successful candidates and issue appointment letters especially at this period of Covid-19 to enable us render our services to the rural dwellers”.The Director General of the Agency, Dr Janet Ekpenyong however told GRASSROOT REPORTERS in a telephone conversation in June, 2020, that those who were successful will be given appointment letters.She attributed the delay in the release of the names of successful candidates and issuance of appointment letters to Covid-19 which has ravaged the country and disrupted activities.“You know Covid-19 has disrupted a lot of things but those that were recruited will definitely get their appointment letters. What is left is for them to be given appointment letters and pay-rolled”.When reminded that the interview was conducted long before the outbreak of Covid-19, she said:” After the examination, elections came and after the elections, appointments were not made till January, 2020. Like me, I got appointed in January. You know once there is no political head, it’s hard to push things”.

But almost two years after her assurances, nothing has been done.

“Nobody collected a dime from anyone for registration.

“Job recruitment is a civil service issue, the Agency doesn’t recruit people on it’s on, it’s via civil service. We are still waiting and hopeful that will be sorted out soon.”