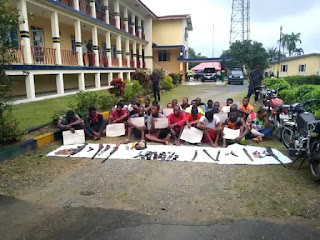 The Cross River State Police Command has neutralized a kidnap syndicate, gun-running gang while parading a mother of three for selling her three-month-old baby.

Briefing journalists on the achievement of the Command, the Commissioner of Police, CP Aminu Alhassan said his men were ready to smoke pit criminals from the state as no stone would be left unturned in policing the state.

He disclosed that a tactical team of Anti Kidnapping & Cultism Squad, AKCS led SP Awodi has been ahead of the criminals following various successes recorded by the squad.

According to him, four notorious kidnapping / Armed Robbery suspects were bursted by AKCS based on a distress call while they were robbing residents of Intergro at 8 miles, Calabar

“Upon receiving the call, the Dragon Squad led by SP Awodi swung into action, by swiftly moving to the scene, The hoodlums on sighting them opened fire. There was a gun duel which left the suspect injured, four were arrested including 19-year-old Samuel Ejeje.

“They confessed to being members of Skylo Confraternity and they have been terrorizing resident of 8 miles, Ikot Effanga, Ikot Ishie and it’s environs, We are on their trails as efforts are on towards the recovery of (3) AK 47 rifles they claim they have,” Aminu said.

Speaking further he said one Kingsley Mbaku was apprehended based on intelligence that transport locally made AK 47 and moves them to Cameroon.

“We recovered a locally fabricated AK 47 with 200 rounds of 7.62mm live ammunition, we also arrested a mother who sold her three months old baby for 150,000 naira amongst others,” he said.

He explained that 30 suspects were arrested within the period under review while a Camry, a bus,3 motorcycles,18 phones, wraps of Indian hemp were recovered.

CP Aminu appealed to Cross Riverians and Nigerians at large that lawlessness or self-help cannot proffer solution in any enlightened society but seeking legal redress in settling was more profitable.

“It is on this premise that I advise CrossRiverians to be calm, focused, and go about their legitimate business, as the police Command will never relent in tackling and providing robust security architecture for the citizenry at all times as required by law,” he stated.

Funding by Vanguard further revealed that a car snatching syndicate also paraded have been terrorizing residents of Calabar metropolis for long, were also apprehended.

Vanguard gathered that they specialize in carjacking especially from church premises, they dismantle the engine within 30 minutes as they steal the cars.

On her part, Esther Okon a 23-year-old mother of three told Vanguard that she had to sell her 3months old baby for 150,000 in a bid to pay her house rent and foot other bills.