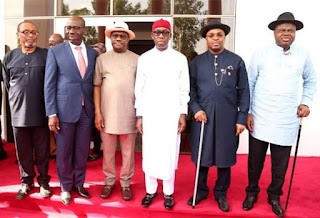 Fatigue, Non-release Of N3m Caused My Absence From Governors’ Meeting- C’River Dep Gov
Obio Monday
Despite the absence of Governor Ben Ayade and his Deputy, Prof. Ivara Esu, from the South South Governors’ meeting, the governors of the oilrich geopolitical zone, on Friday demanded for a special status to be accorded the state (Cross River) following the loss of Bakassi Peninsula to the Republic of Cameroon and the subsequent ceding of its oil wells to neighbouring Akwa ibom State.
The governors also demanded for the upward review of oil derivation formula from the present 13percent to 50percent and immediate relocation of the headquarters of oil companies to their host communities.
These, amongst other demands were the resolution of the governors, local governments and people of the Zone at the 2-day public hearing on the Review of Revenue Allocation Formula, organised by the Revenue Mobilization Allocation and Fiscal Commission, RMAFC.

The event held in Port Harcourt, had the six State Commissioners for Finance in the zone, as representatives of their various state governors, as well as local government chairmen, civil society groups and stakeholders from the six states of the zone.

Delta State Commissioner for Finance, Dr Fidelis Ekenwo, who read the position of the zone, said the governors rather than balkanised their presentations, decided to put together one resounding voice, to address the situation as it concerns the zone.

He also said allocation to the states should increase to the basis of 42percent to states, 35 and 23 to the Federal Government and local governments respectively, adding that allocating more money to the federal promotes wastes and inefficiency at the federal level.

“The people of South South wants the 13percent derivation to be moved up immediately. We are recommending that the new derivation should be 50percent. We are clearly unhappy because we believe that the current 13percent is not doing anything for us.

“Every state should take charge of their resources and contribute an agreed percentage to the centre forthe services of the Federal Government.

“Oil companies should relocate their headofffices and operational base to areas of their operation.

“In the South South, any state that suffers any negative impact also affects other states. We are asking that there should be a special status for Cross River State. The country is clearly aware that the Bakassi peninsula and several oil wells in Cross River state was ceded away to Cameroon by the federal government of Nigeria following the implementation of the Green Tree Agreement.

“This action was carried out unilaterally by the federal government without any consensus by the people of Cross River. Hence, a special status should be accorded the state and a special fund of 1.5percent of the federation account should be given to them.

“Finally, we are demanding that the revenue sharing formula should be increased to 42percent to state, 35 to federal govenrment and 23 to Local Governments.”

Meanwhile, the Cross River State Government has given reasons why neither Governor Ben Ayade nor his deputy, Prof. Ivara Esu, attended the South-South Governors meeting in Port Harcourt, Rivers State on Monday.

The Deputy Governor, Prof. Ivara Esu said this in an interview with The Guardian, that fatigue and inability to secure the release of N3 million the state earmarked for the trip made it impossible for him to attend the meeting.

Five of the six governors of the zone attended the meeting except for Ayade, but Esu, who was supposed to attend could not.

Ayade could not attend the meeting either, as he traveled with the 18 council chairmen of the state and some House of Assembly members for an agricultural summit in Paris, France.

The Deputy Governor stated that N3 million was approved for the trip, but the money was not released at the bank.

He said:
“Besides, I was quite fatigued after travelling to Ogoja for Dr. Stephen Odey’s defection on Saturday. I came back and presided over the 61st Independence Anniversary in Calabar, before leaving for the burial of General Ukpo at Okpoma and returned to Calabar same day to head for Port Harcourt on Sunday for the meeting on Monday,” he stated.

He also disclosed that officials of the state government tried to contact Government House, Port Harcourt, but there was scanty information on their request until Monday morning when the meeting commenced.

Their failure to attend the meeting had further alienated the state from the zone, as the Ayade-led government could not endorse some decisions on open-grazing ban and the legal issues against the Federal Government on collection of Value Added Tax (VAT), among others, at the South-South governors’ meetings.