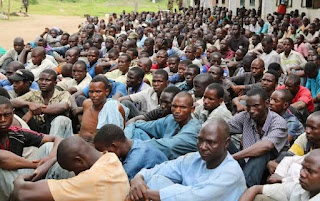 The Defence Headquarters on Thursday said a total of 13,243 repentant terrorists and their families surrendered to troops of the Armed Forces of Nigeria at different locations in the North East in the last two weeks.

Speaking in Abuja on Wednesday at a briefing on military operations between October 1 and October 14, the Director, Defence Media Operations, Brig. Gen Benard Onyeuko, said of the number, about 3,243 are adult males while 3,868 are women. Children constitute about 6,234 of the total figure.

He added that no fewer than 29 terrorists were killed while 13 terrorists and their collaborators were arrested during the period.

Onyeuko said, “Consequently, more terrorists have continued to lay down their arms and surrender to our troops with their families as they could no longer withstand the offensive operations within the theatre. Some of these feats were recorded at; Gwoza – Yamtake – Bita road; Gwoza – Farm Centre – Yamtake road; Mandara Mountain area as well as Pulka and Hambagda towns; all in Borno State.

“Cumulatively, within the period a total of 29 terrorists were neutralised and 13 terrorists including their informants/collaborators and logistics suppliers were arrested in the course of the operations.

“Additionally, a total of 38 assorted weapons and 968 rounds of assorted ammunition as well as 48 rustled livestock among several other items were recovered. So far, a total of 13,243 terrorists and their families comprising 3,243 adult males, 3,868 adult females and 6,234 children, have surrendered to oun troops at different locations in the North-East.”

He added that troops killed at least 40 bandits and arrested bandits’ collaborators on the wanted list of security operatives in the country during the same period.

“These arrested criminals and items recovered have been handed over to appropriate prosecuting agencies for necessary action.”

He stated that in the period in focus, using a force package of Nigerian Air Force platforms, multiple airstrikes were executed on bandits’ enclaves in successive passes in different locations.

“One of which was at the Kwaga forest within Birnin Gwari general area in Kaduna State. In the course of the operation, no fewer than 40 armed bandits were neutralised and several structures which served as their logistics bases were destroyed,” he added.