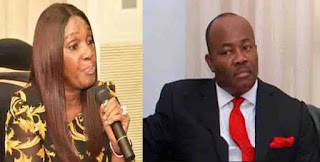 Ms Nunieh had in an interview with AriseTv accused the former Akwa Ibom governor of sexually harassing her and attempting to force her to swear an oath of secrecy.

Reacting to the allegations, the Minister said in a press release signed by his Special Adviser, Media, Aniete Ekong, that the allegations against him were ‘wayward’ and sponsored.

He said he is married and contented with his wife, as such, he has no reason to sexually harass a woman.

Chief Akpabio added that the attacks on his person by Ms Nunieh are both personal and sponsored.

He however vowed to sue her: “The Honourable Minister has taken steps to instruct his lawyers to seek necessary redress in a Court of competent Jurisdiction on his behalf over the defamatory statements made by Ms. Nunieh”

OFFICE OF THE HONOURABLE MINISTER

The attention of the Honourable Minister of the Niger Delta Affairs, Senator Godswill Akpabio, CON has been drawn to a cornucopia of false, malicious, and libellous press interviews granted by Ms. GBENE JOI NUNIEH, the erstwhile Acting Managing Director of the Interim Management Committee, of the Niger Delta Development Commission, (NDDC) in some news and social media platforms and a series of concerted vicious campaigns of calumny deviously orchestrated by her against his person ranging from allegation of corruption, sexual and workplace harassments, pipelines bombings, secret cult activities, abuse of office, amongst other lies peddled by her.

The Honourable Minister’s initial attitude was to allow his lawyers and the judicial system vindicate him of the false allegations against him, but he is compelled to react to some of the wayward allegations levied against his person by Ms. Nunieh, especially the one bothering on sexual harassment.

To start with, let it be known that there is no scintilla of truth in all the allegations peddled around by Ms. Nbnieh. They are simply false! The Honourable Minister did not at any time, place or circumstance make any form of sexual advances to Ms. Nunieh, not even to put himself in a position or posture suggestive of sexual advances towards Ms. Nunieh, or any female staff of his Ministry or the NDDC.

For the records, the Honourable Minister, Senator Godswill Akpabio, CON is happily married and contented with his wife. Together they are blessed with children, four (4) of whom are young women. The Honourable Minister is an avid believer of the Affirmative Action and that was visible in the appointments he made as a two (2) term Executive Governor of Akwa Ibom State between 2007 and 2015. Under his watch, he • appointed several women into various high level positions as

He is the first Governor in Akwa Ibom State to have a female Deputy Governor, was also the first to appoint female Chief Justices of the High Court, recommended women for ministerial appointments one of whom was the Minister of Housing and Urban Development, and supported for appointment the first female Vice Chancellor of the only Federal University in the State etc. He has always championed and still champions the cause of women and young children.

Whilst the Governor of Akwa-lbom State, the Honourable Minister summoned the political will and effrontery to stop modern day slavery in his state, where young women and children were ferried away from the State to other states in Nigeria to be used for all sorts of menial chores as house maids and most suffered unimaginable unethical trade malpractices and maltreatments. He ensured that anyone caught in that trade was severely punished. He signed the Child Rights Law to protect children, especially the girl child from stigmatization and punishment by ordeal where some were executed or banished on allegation of witchcraft. The Child Rights Law also made primary and secondary education in Akwa Ibom State free and compulsory; educating the girl child was his topmost priority.

The Honourable Minister has never tfden his admiration and respect for his wife, Mrs. Ekaete Akpabio, Children and sisters, he therefore felt compelled to react to the malicious attack on his person by Ms. Nunieh bothering on allegations of sexual harassment. The Honourable Minister therefore finds the said allegation nauseating and a very cheap blackmail, for Ms. Nunieh to suggest or insinuate that he sexually harassed her, while she was the Acting Managing Director of the NDDC.

The Honourable Minister also finds it appalling that, Ms. Nunieh, never deemed it fit to report the alleged incident to the police at the earliest opportunity she had, before, during or after her tenor as the Acting Managing Director on 17th February, 2020, if indeed the allegation was true. Waiting till July 10th and 13th 2020 when the National Assembly appears to be probing some of her actions as the Acting Managing Director of the Interim Management Committee (“IMC”) exposes her motive, especially at a time when the momentum for the Forensic Audit

Investigation of the NDDC is heating up and the truth is about to be unveiled for all to see? The critical question is who is afraid of the Forensic Audit at the NDDC? Who is Afraid of the Truth?

There is no doubt that Ms. Nunieh’s attacks are both personal and sponsored. Those afraid of the truth, and who wish to bury it from seeing the light of the day, are strenuously behind Ms. Nunieh’s vicious campaign of calumny.

The Honourable Minister has a mandate from Mr. President, President Muhammadu Buhari, GCFR to unearth alleged looting and financial misappropriation that had gone on at the NDDC since its inception in 2001. He is committed to that mandate through the forensic audit of the NDDC and will not be deterred or distracted from that goal. The aim of this campaign of calumny is simpler get Senator Akpabio out, kill the forensic audit, and continue business as usual at the NDDC.

On the allegations of the Honourable Minister’s involvement in contract racketeering, bombing of oil pipelines, corruption/diversion of funds, the Honourable Minister has stated several times and at various fora that since his assumption of office, he has only awarded three contracts till date- the appointment of the lead forepsic auditors which was approved by the Federal Executive Council the emergency procurement contract for COVID-19 intervention in the Niger Delta Area which due to its urgency had his interim approval and Presidential approval in line with the Bureau of Public Procurement Act and the award of Vehicles procurement duly approved by the Bureau of Public Procurement and the Federal Executive Council but yet to be consummated. It is noteworthy, that all these contracts went through due processes.

On her allegation that the Honourable Minister directed her to change the Dollars in the NDDC’s Account; for the records, it should be noted that NDDC’s Account is domiciled with the Central Bank of Nigeria. Every inflow and outflow is known and traceable. NDDC gets its revenue in Dollars which is paid directly to its Treasury Single Account (TSA) with the Central Bank of Nigeria. The Dollar is then converted to Naira by the CBN and paid into the NDDC Naira Account still domiciled with the CBN upon a written application from the NDDC. It is therefore impossible for any sum of money belonging to the NDDC with the CBN including the several figures bandied around as missing to be missing.

It is important to state, that unlike in the past where the NDDC had over three hundred (300) bank accounts in different commercial banks, that practice had since changed under the President Muhammadu Buhari’s administration, which gave full effect to the application of the Treasury Single Account and the NDDC now has its accounts with the CBN. The Honourable Minister does not give verbal instructions to anybody, all instructions are in writing and in response to a request from the Commission.

On the allegation that the Honourable Minister directed Ms. Nunieh to remove Mr. Kaltungo, same is false. His track record marks him out as a totally detribalized politician and one of the best friends of Northern Nigeria. The Honourable Minister was informed by the NDDC management that over twenty three (23) top Management Staff, from various part of Nigeria including the Niger Delta region, who have evaded leave in the last ten (10) years or had the tendency to influence negatively the ongoing forensic audit were recommended for mandatory leave by the lead forensic auditors. They are still staff of the Commission currently receiving their monthly salaries and benefits.

The Honourable Minister has taken séps to instruct his lawyers to seek necessary redress in a Court of competent Jurisdiction on his behalf over the defamatory statements made by Ms. Nunieh.

On a final note, while encouraging all Nigerians to hold their leaders to account, he urges them to take their time to sift between the chaff and the substance before embarking on far reaching allegations, opinions and views.