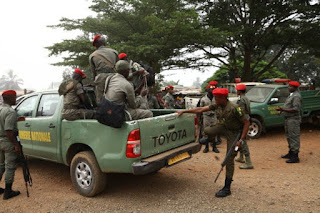 A community, Bashu in Boki Local Government Area of Cross River State, have cried out to the Nigerian and Cross River State governments to come to their aid as Cameroonian gendarmes have taken over the community.

The community which is a stone throw from Cameroon, lamented the heavy presence of soldiers from that country in their community.

The community also cried out over what they termed ‘incessant security violations by the gendarmes and their nationals trying to flee from hostilities in their country’.

A youth leader in the community, Comrade James Enu, told reporters that Cameroonian soldiers have frequently crossed into their village and surrounding hamlets in search of their nationals who are said to be hiding in the area.

Mr. Enu said they have no security post aside from the two Immigration checkpoints, which he said are being manned by the community’s vigilante group and six immigration officials.

His words: “We would like to request that the federal and state governments help us beef up security in the surrounding border communities, especially ours. We need a police station and a barrack. Even the immigration checkpoints are being invaded by the Cameroonians, especially those seeking refuge. The huge number of Cameroonian soldiers in our communities is too much,” he said”.

He also said that the first checkpoint they erected leads to Cameroon villages/towns of Manfe, Douala, while the second leads to Ekugusum, Kajifum, Yaounde and Boya in Cameroon, adding that: “Most of these communities use these routes to enter our state but when the COVID-19 pandemic broke out, we decided to lock the road’.

“In the Cameroonian villages, their soldiers are there in thousands and most times when they shoot, we are filled with fear, so we need more government efforts,” he stated.

When contacted, the Permanent Secretary in charge of state security in the governor’s office, Dr Alfred Mboto, said he was not aware of the development. He said his officials have been stationed in the area and had not reported that to him.

Do you have a story, picture, video that you want us to publish? or want to become a regular contributor? If yes, send your report to our editors.

Would you like to advertise with one of Nigeria’s fastest growing news portal?
Would you like us to cover your event or press briefing?

Call, text or Whatsapp: +2347033996028
Email: grassrootreporters@gmail.com
Be a part of Grassroot Reporters Team. Report latest happenings around you. Send in your reports, adverts to WhatsApp: +2347033996028 or email: mondayobiojnr@gmail.com